At the peak of recess, an argument arose;

“I could beat you up with my skateboard you stupid nerd!”

“Nuh-Uh! I just read about an ancient demon fighting style I could use!”

“I would spin around both of you until you’re dizzy then I would shoot you with my gun!”

Eventually the students decided there was only one way to settle the score: hypothetically...

“I would melt everyone's faces off if I had a princess wand!”

“Not If I was a bear with chainsaws for arms!”

The battle rages on, can you decide who would win? Almost certainly not, but you can at least figure out who is wrong and stupid.

Kuthrote Kids is an online four player game. Beyond that, it's hard to classify. There are no explicit teams, and no in-game incentive to help other players, but it's nearly impossible to win on your own.

Each player starts in the middle of the board, and the goal is to battle your way outwards until you defeat a boss. As you flip over tiles, you will discover monsters, weapons, items and traps, which may strengthen or weaken your character.

Whenever a monster is discovered, nearby players have the option to help or hurt you. You can team up with another player to carve a swathe straight to a boss, or hang around the other team to Inhibit their progress.

Once a boss has been defeated, the game is over, and you'll know who the losers are!

The original form of this project was a boardgame I made with some friends :)

I came up with the original design, and we playtested it together until it looked completely different. After the boardgame was complete I decided it would be a fun project to practice my Unity coding, so I built this version myself.

Linda created all of the Card art assets, if you like them then check her out at @lemoncreamsicle

I used sasquatchii's Pixel Parchment UI for the Card frames and some menu frames.

I used Kenney Assets for the Buttons, the mouse sprite, and the mini cardbacks on the board.

I also Roboxel's Kawaii game icons for the player Icons.

The font I used is called Hynings, and it does a great job of looking childish while remaining legible.

The rest of the assets are drawn by myself- Sorry :/

The Downloadable unity project is out of date. Update coming Sept 6th! 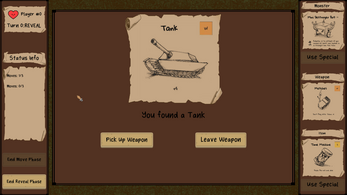 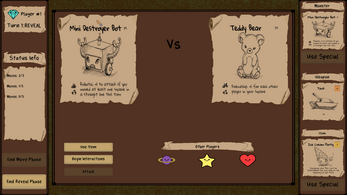 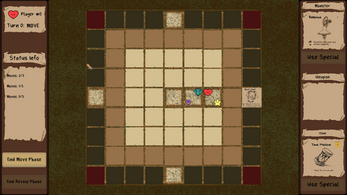 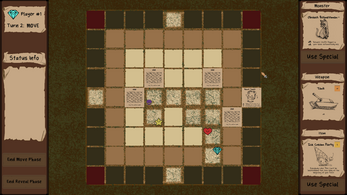 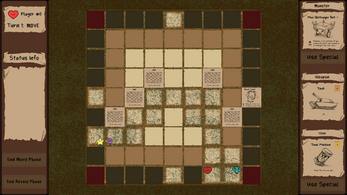